It should have stayed off

I’m not a fan of short intros where reviews tell you outright to avoid a particular game. There are many different factors why a title can end so badly that you want to swallow battery acid instead of playing it. Sometimes things don’t go as planned or a team lacks experience, making it pointless to be too tough. Reviews should serve as a way to give feedback instead of venting your frustrations on the world.

That being said, Turok: Lost Valley Escape will probably end up being the worst game I’ve reviewed in my reviewing career. For all intents and purposes, avoid this at all costs. It’s not worth the frustration it takes to see the ending for yourself. You better assume the video game series ended in 2008 with this stupid game rebooted by Propaganda Games.

If you must know why I say this, read on. 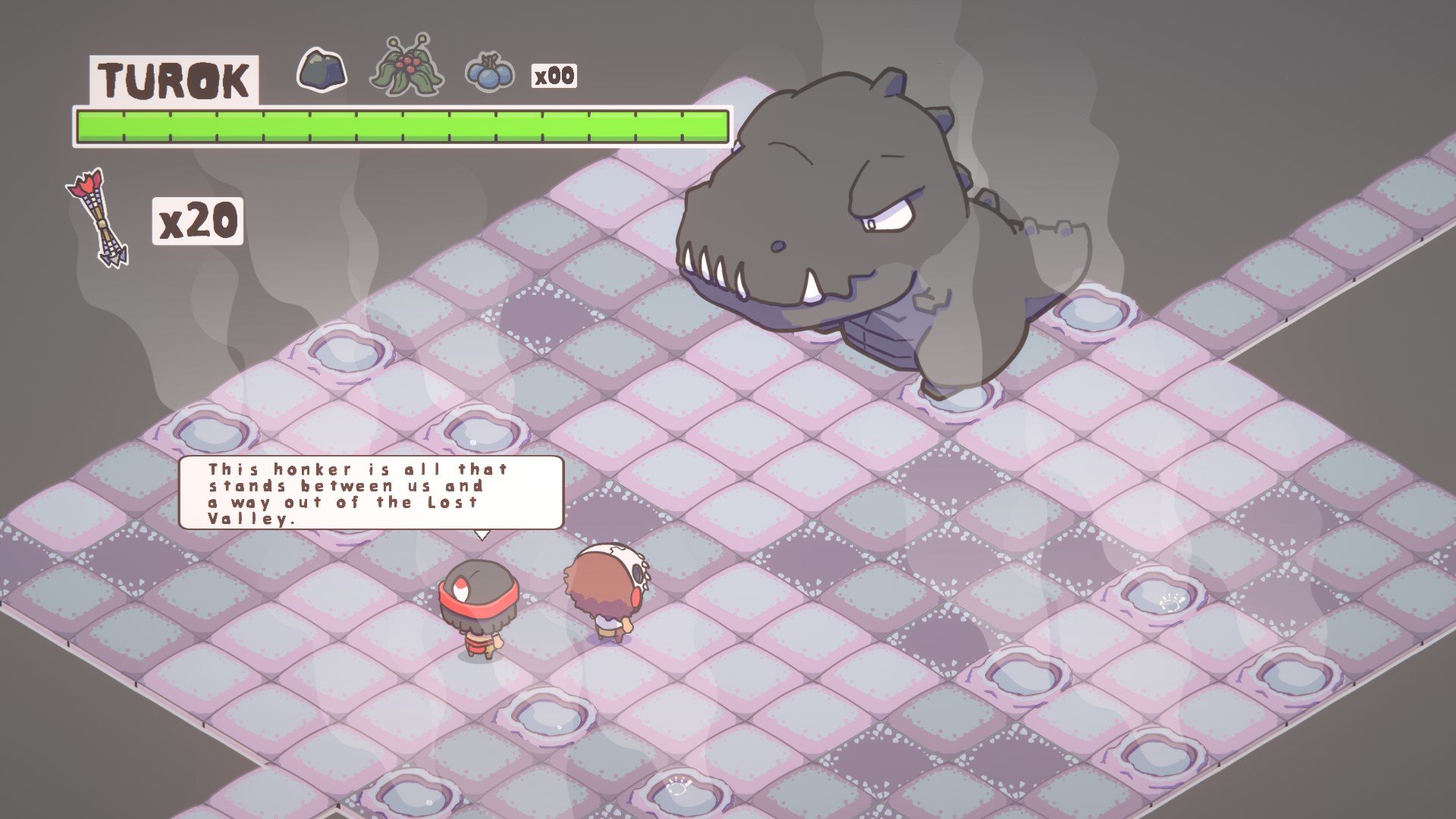 In a simplified and refreshing movement, the title of Turok: Lost Valley Escape tells you exactly what this game is about. The titular star Turok seeks to escape the “Lost Valley”. That’s precisely all this game is about as there are very few cutscenes and dialog boxes to tell you what’s going on. Born out of a contest Universal held for small teams to do something with one of its IPs, it almost sounds like the exact type of game you’d see popping up out of a Game Jam session. It’s light and precise.

In a bold move by the shooters before him, Escape the Lost Valley is an isometric action game that has more in common with Bastion anything Acclaim has ever published. You have a basic melee attack, a ranged bow attack, a dodge roll, and the ability to jump/climb some ledges. It’s all simple and, on paper, should make for an easy game to pick up and relax. Even the level design is rarely taxing, progressing in a mostly linear fashion with slight deviations from the main path for upgrades.

I also want to note the art style, which is another drastic departure from what fans of 90s games are used to. Turok, his friend Andar, and all the enemies look like Saturday morning cartoon characters instead of the dark and macabre interpretation the shooters had. He’s exceptionally cute, looks very crisp in HD, and is undoubtedly charming. It’s also the best part of the game, giving an old classic a new look that feels like a creative take on it instead of just regurgitated nonsense. Sadly, that’s about all the positives I can give for this game. Trailers and images won’t do. Escape the Lost Valley justice, because it’s probably the most broken and frustrating game I’ve ever played.

As is the problem with most isometric action titles, judging the distance between you and your enemies is a dice game. It doesn’t help that Turok’s basic melee attack seems to go three inches in front of him, but often you’ll be behind an enemy and unable to gauge where you are on screen. Add to that the dodge roll that kind of leaves you open to attack after use and every system never turns into more than a massive headache.

The actions are all simple and accomplished with basic button presses, but trying to perform them while hordes of enemies are above you causes a lot of pain. The first level doesn’t properly prepare you for the soul crushing difficulty Escape the Lost Valley is, which is not something I expected from this style of art. For the record, I’m fine with games being as hard as developers want them to be, but Escape the Lost Valley seems to have confused defiance with simply being unfair.

If you remove how often you die from sloppy controls, poor visibility, and terribly awful bosses, levels of Turok: Lost Valley Escape would probably take about 15 minutes each. There are only six in the game and it seems that effort has gone into increasing the difficulty instead of providing honest challenges to the player. I’ll give credit to each area having a different theme and presenting unique enemies to the player, but they all work the same and are often thrown at you in overwhelming numbers instead of complementing each other. 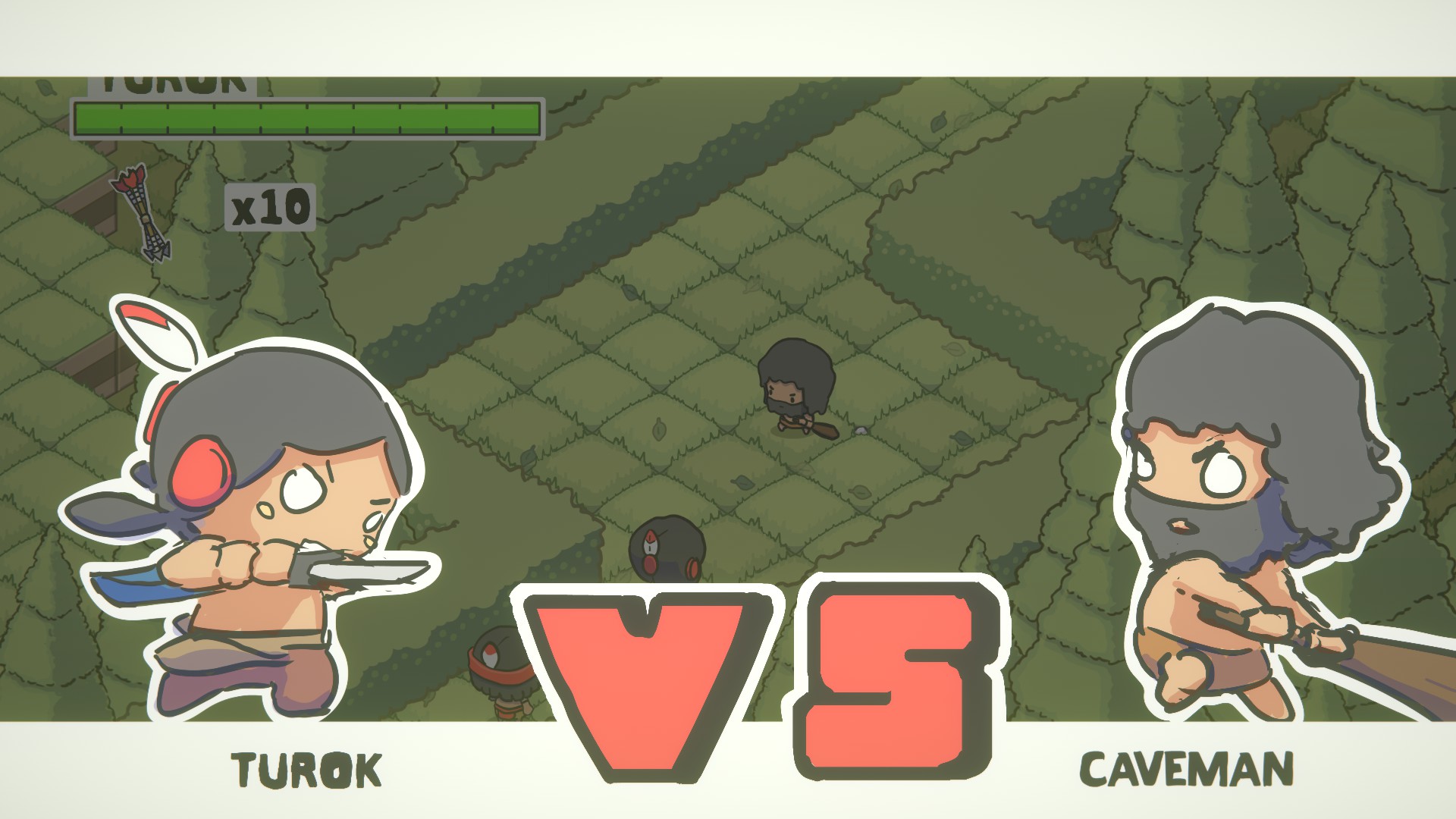 The best (worst?) example I can give comes from the third level. Andar, your perpetually incompetent partner – speaking of which, this game somehow doesn’t feature co-op play – is captured by ‘Monkey Men’, so Turok must battle them to save him. While it starts out with just two enemies attacking you, the game doubles that number for five different waves of enemies. Their movement patterns are erratic and non-repetitive, so you have no idea where they will go. They throw vines at Turok that tie him up when they connect. Instead of letting the player mash buttons to get out of this trap, Turok just sits there like an idiot for a few seconds, giving enemies plenty of time to strike.

No matter which difficulty you choose, enemies attack you for three health points from your health bar. I don’t think I need to tell you how irritating it gets after a while. You can’t move predictively to dodge these attacks, getting enemies to even open takes forever, stupid intro dialog pops up every time you restart, Turok’s attack has range so limited that you’ll often miss and leave yourself open, dodge roll is almost worthless since enemies can ignore it, arrows are useless as enemies move too fast…I know I’m rambling here, but the thoughts going through my head and the words coming out of my mouth during that moment almost made me want to knock my door off the hinges.

It also doesn’t stop for the whole game. As I said, instead of providing a healthy challenge to the player that requires skill to overcome, it seems that Pillow Pig Games has increased the “difficulty” to make up for the obscenely short levels. Even knowing how to combat these threats does not make these times any easier. The game is simply unfair with how it taxes the player on any given turn. Worse still, it actively wastes your time at times by having you repeat moments of dialogue or inescapable cutscenes. 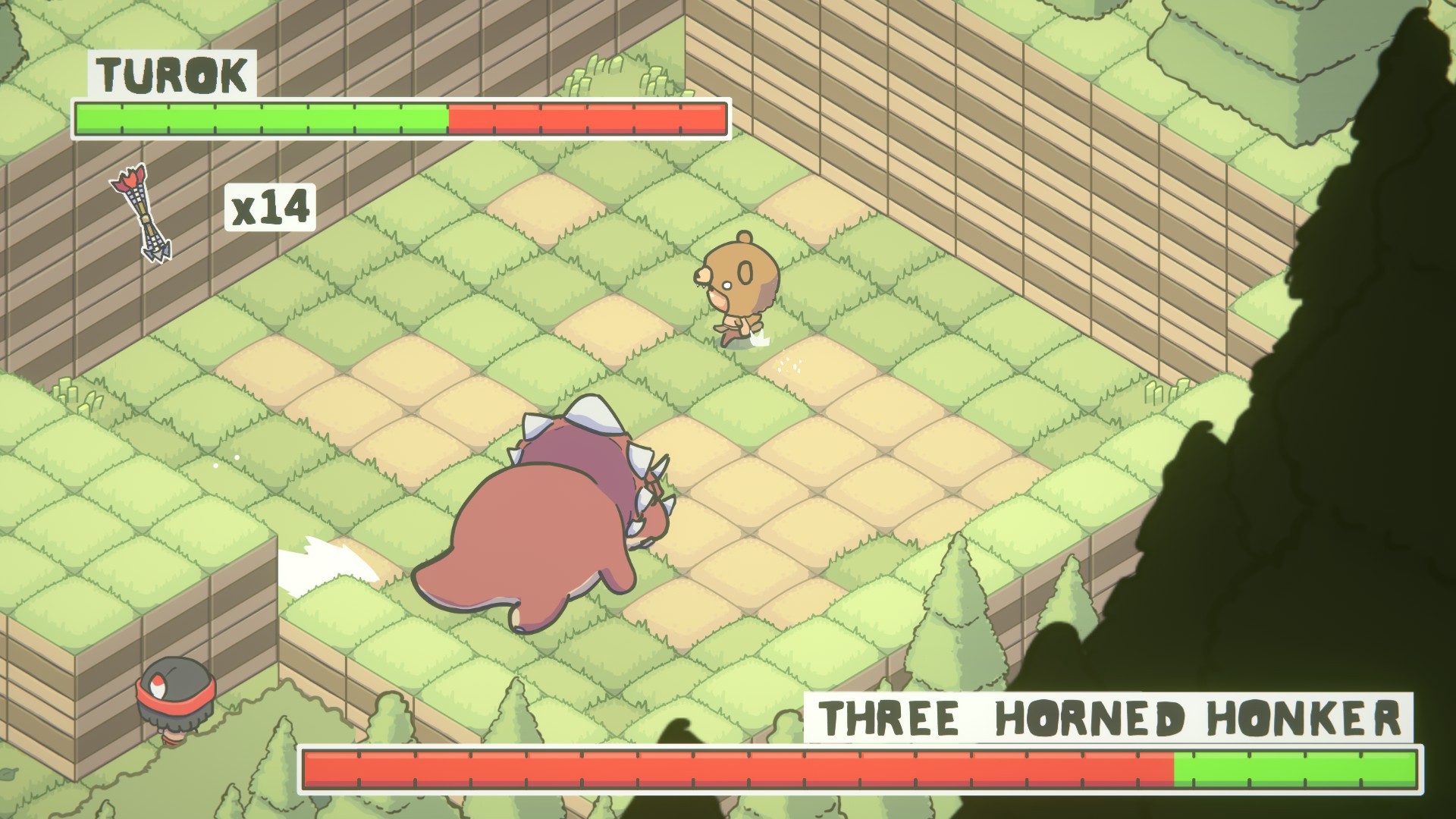 I could almost forgive some of that, but the real moment that took the cake for me was in the final level. To properly describe the anguish I went through, I have to set the scene a little better. When I started Turok: Lost Valley Escape, I selected “Hard” because I really wasn’t expecting much. The first boss destroyed me, so I incorrectly assumed this mode was balanced for co-op play. Co-op isn’t an option (as stated above), so it’s really for masochists. I dropped it to “Medium” and was able to upgrade to the third level. I was quickly flattened by the third boss. Since I kinda hate myself and really wanted to give everyone the best possible review, I started over a second time, swallowed my pride, and set the game to “Easy”.

So after all that, I managed to get to the final level after four and a half hours and came across a boss fight with two invisible lizards. You can see their tracks on the ground, thankfully, but they often popped up behind me as I aimed for what I thought was one of them. Andar, my ever-precious friend, nailed me with an arrow and interrupted my attack. At the same time, a lizard popped up and bit me from behind when I was unable to move. Trying to dodge the roll to escape more damage, I ran straight into the second lizard I couldn’t see which bit me again and sank my health to almost half. Since the game wasn’t done eating my existence with it, the original lizard hit me a third time and left me with a single point of HP. Why don’t you just kill my family, while you’re at it?

Did I finish the game? In fact, I did.

After cursing a blue streak, turning off the game for the rest of the day, and punishing myself in the gym for a few hours the next morning, I managed to knock down the bastards after five more attempts. I don’t know why I was so determined, but the deed is done. Shortly after, the final boss was in front of me and he was relatively a joke. Turok: Lost Valley Escape can’t even keep his BS consistent. 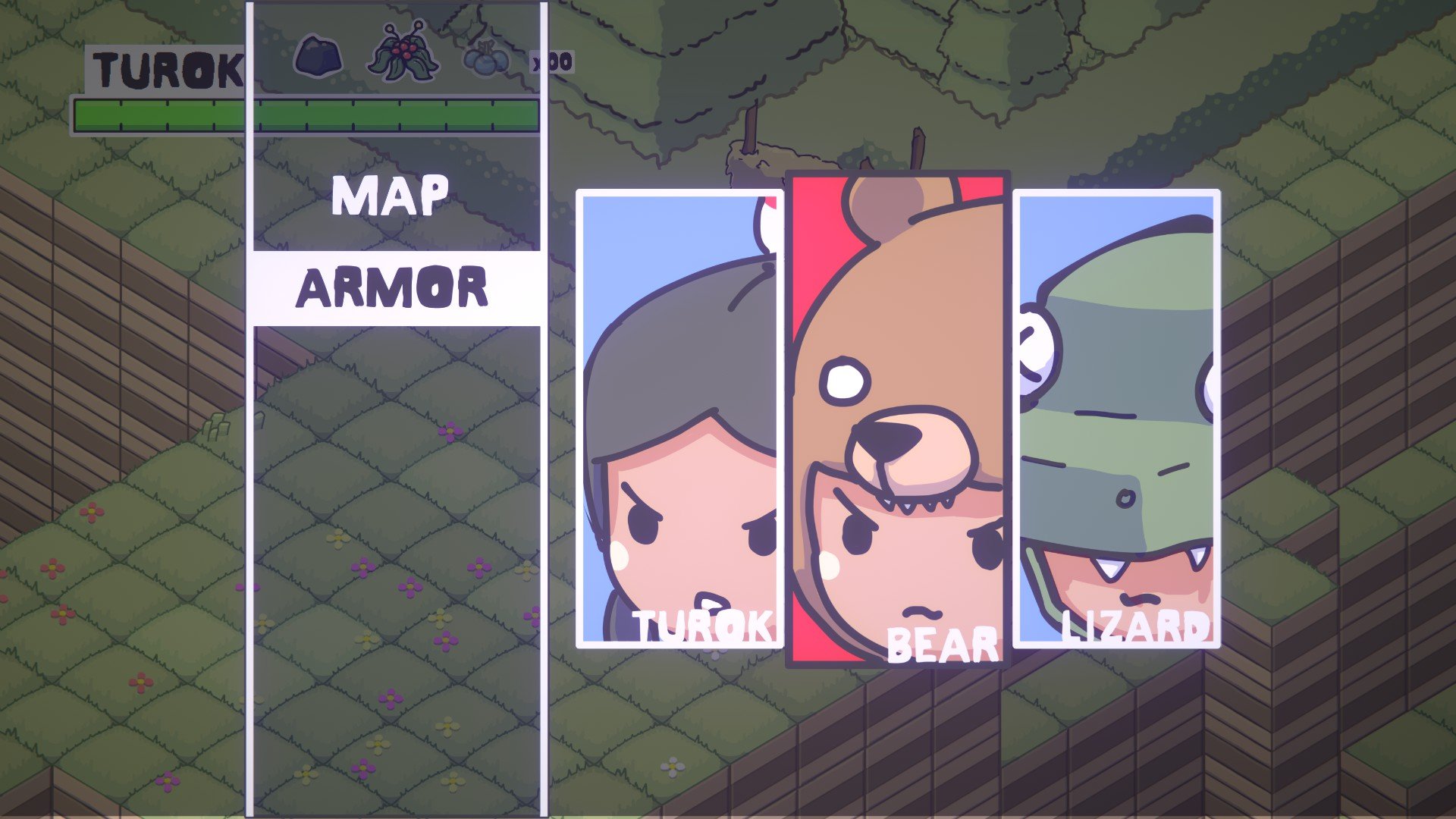 But really, the idea of ​​this title is not bad. I do not see why Turok can’t be a cute action title having more in common with the comic book line than 90s shooters. I even really dig the art which pains me to write how everything else is horrible. I know this was made by two people and designed from a contest, but it’s really not an acceptable version.

My only hope in writing this is that people honestly read the words I wrote. I really don’t want anyone to take a quick look at the score and say, “I knew that! My childhood is dead and these developers are morons! I loved Turok when I was a kid and these games still exist as they were. I don’t feel that Escape the Lost Valley is a betrayal of my youth or anything melodramatic. I’m mostly upset that this brilliantly adorable game turned out so terribly poor.

So unless you’re in the mood to ruin your day and possibly take a few years off your life, do yourself a favor and jump in. Turok: Lost Valley Escape. Whatever the basic concept, it didn’t go over well.

Days Gone isn’t great, but Sony was absolutely right to take a risk with it