Pushing the envelope…with your boobs

Ohhhhh… now I understand why Sony only wanted a censored version of this game on their console. 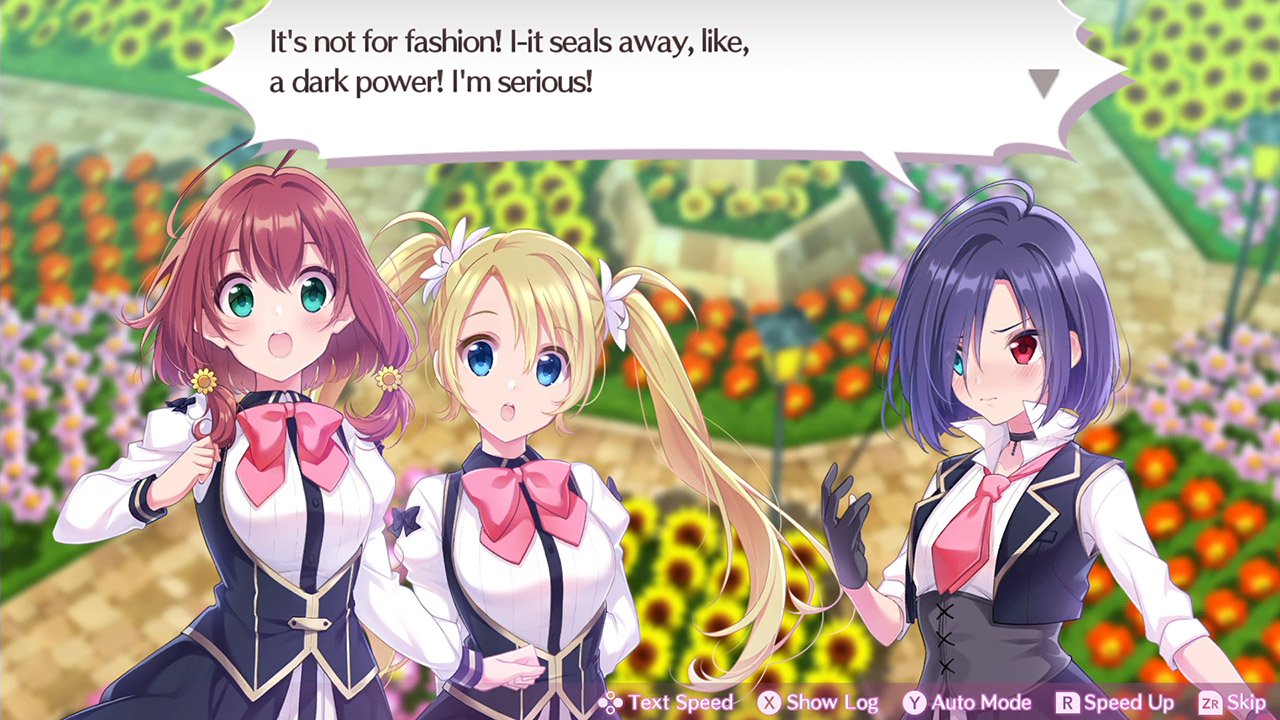 From developer Matrix Software, Omega Maze Life is a breast touching simulator with light gardening and dungeon crawling thrown into the mix. You play as Hinata Akatsuki, the very first transfer student to Belles Fleurs Academy, a prestigious school of legacy students and faculty members with breasts of all sizes. At the center of the academy is its world-famous Grand Garden, a colorful and diverse flower bed that is always in bloom. The plot, much like the pants of many people playing this game, thickens from the start when the flower field suddenly dies and the beautiful girls and women of Belles Fleurs think Hinata is to blame.

Clearing her name and finding the real culprit behind this Plant Spell will send Hinata and her friends deep into the various roguelike dungeons scattered across the garden. If you played Pokemon Mystery Dungeon or one of Shiren games, you should have a good understanding of what’s going on here. Dungeon maps are procedurally generated, enemies only move when characters move, and players must contend with a host of traps as they venture into the unknown.

Like I said with every Mystery Dungeon game I reviewed on this site, I’m a huge fan of the genre and appreciate the progress it has made in truly improving what is often considered unrefined and boring. Unfortunately, none of these improvements have been integrated Omega Maze Life. Dungeon crawling here is very “roguelike 1.0” with long hallways connecting to mostly square rooms. The lack of diversity in the programming that creates these dungeon floors is actually more apparent the further you go through the game. It might have been a negligible complaint if the developers had bothered to add some kind of challenge to the experience.

This is by far the easiest roguelike I’ve ever played. Main story dungeons pose no real threat to players outside of a particularly tight inventory limit. Enemies are incredibly rare on each floor, and the game introduces a few mechanics that eliminate much of what can make the genre so punishing. There are monster rooms here – rooms filled to the brim with monsters and traps you sometimes fall into – but these are no problem when you unlock one of Hinata’s special moves that allow her to deal damage to every monster in a room. Just activate it and watch the bodies disappear. Another playable character has an ability that will randomly reveal the entire floor map, removing much of the mystery in these mystery dungeons. These abilities aren’t exactly new to the genre, but they’re unlocked far too early in the game, with Hinata’s Room Demolisher breaking down the little challenge players will encounter.

There are optional dungeons that offer a bit more backtracking, but even they pale in comparison to what the genre has produced before. i heard the original Omega Maze was extremely difficult and I can’t help but wonder if the developers decided to go in the opposite direction for their first international release.

But of course the point of Omega Maze Life has never been about challenging players with increasingly difficult dungeons as they learn to master the genre. Neither was Life meant to be a satisfying gardening sim, as caring for the Great Garden is lackluster and undercooked. No, the whole point of this game is fan service and boy, is that something he has in spades. 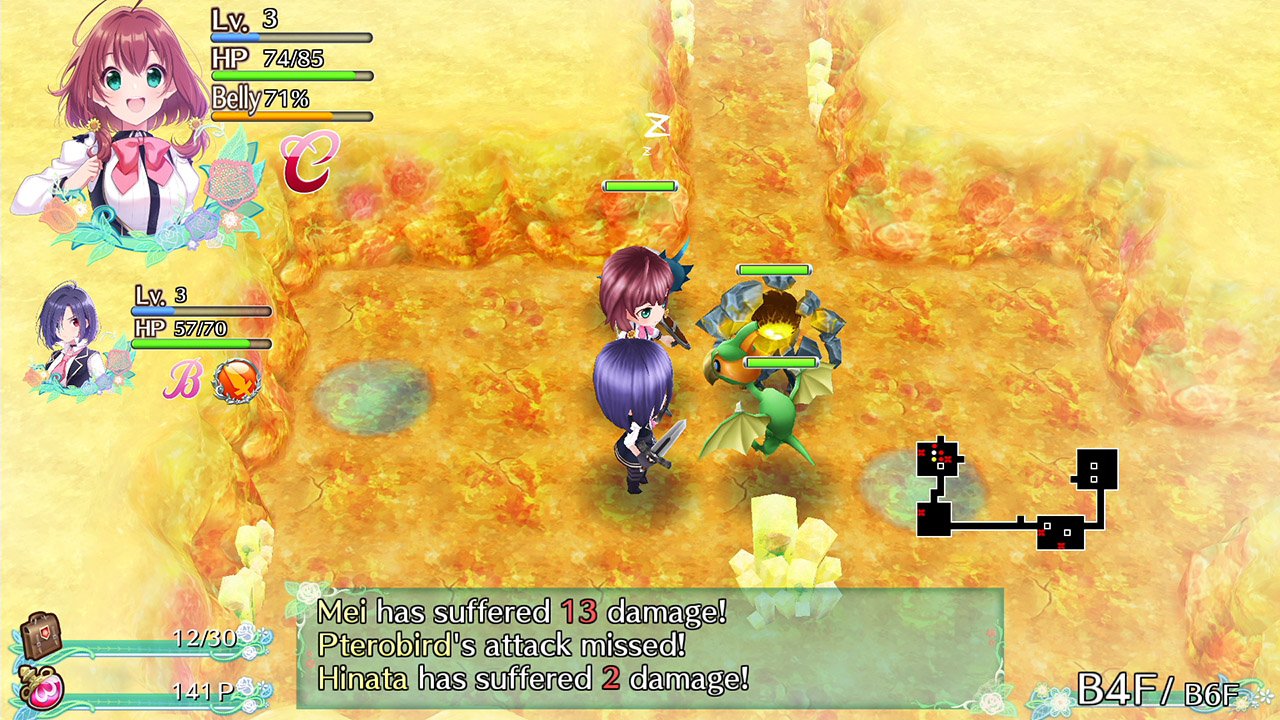 At any point in your adventure, whether it’s walking through the garden, dipping in the dungeon, relaxing naked in a spa, or watching a cutscene, you can make girls’ tits shake like Jell -O with the flick of your finger. As you explore dungeons and defeat enemies, you’ll collect Omega Points which will occasionally increase the size of your main character’s chest until it literally bursts out of his shirt. Watching their daughters go from grapes to gonzagas actually takes a long time because chest size, as well as character level, will reset each time you leave a dungeon; so if that’s something you’re interested in, you better be ready to tackle the 99-story dungeons. At first I thought that would be the most outrageous aspect of this game, that you could make a high school kid’s boobs grow so big they’d put Dolly Parton to shame.

Then I fucked Hinata.

As you explore the various dungeons, you will collect Unidentified Items. It’s a tradition of the genre, but how you identify them is completely unique to this game. First, these items are portrayed as soft and useless. In order to harden them and reveal what the object is, you must place it between your main girl’s breasts, then crush and rub it with her breasts until it becomes hard and red before throw a large white mist on his face. And no, that’s not an exaggeration.

My jaw dropped when I first saw this and I wasn’t sure what to make of it. Animated booby games have been pushing the boundaries of salacious content for some time, with even relatively mild activity drawing the ire of objectors. But while other franchises have been limited by standards of decency or fear of going too far into porn game territory, Omega Maze Life pushes the boundaries of what’s allowed in console gaming, from the sexy cheesecake fun of its contemporaries to something that’s actually pretty nasty. Because that minigame above isn’t even the most shocking sight in the game.

By growing flowers in the Great Garden, you will collect nectar. Nectar is used to unlock new abilities for all girls. When you buy a new ability with the Omega Points you collect in dungeons, you can take the girl of your choice to the campus greenhouse for a little heavy petting action. When you touch dots on the screen with your finger in handheld mode (or with the cursor using Joy Con controllers), she will start to get excited and excited if you tap the perfect dots on her body. After hitting enough of her special points, you’ll need to start hitting her as fast as you can to rack up points. Time slows down allowing you to rub at the last second, and once she can’t take it anymore, the girl squirting sprays its juice all over the screen. And then you use it sperm juice to water the garden and help plants grow. 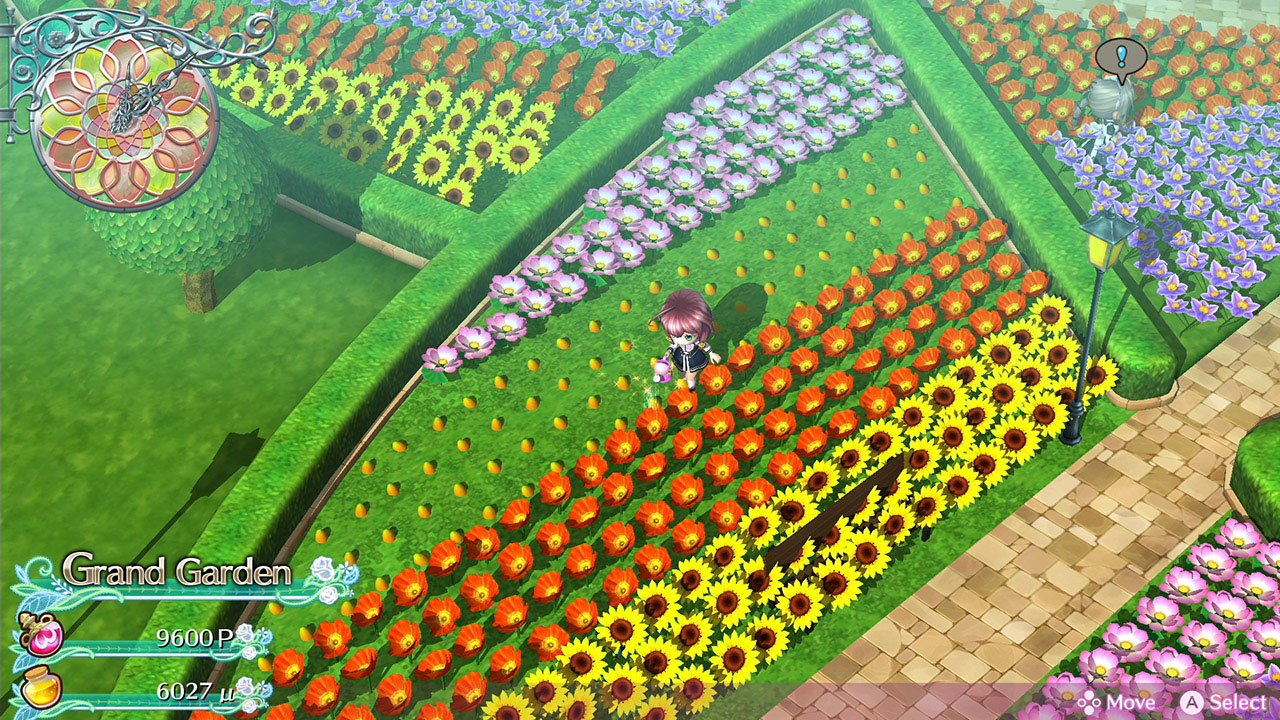 There’s another mini-game called Tit-for-Tat, which is Rock, Paper, Scissors with boobs, but compared to making those girls squirt, it might as well be a game of Pat-a-Cake. I sat there in disbelief the first time I had Hinata shot. I couldn’t believe I just witnessed this on the same device I use to play Happy birthday. I’ve played other titles before that include petting minigames, but this is the first time I’ve felt like I need Lysol off my console. I would eventually lift my jaw off the ground and continue into the next dungeon, but not before starting to wonder if this game had simply gone too far.

It would be easy for me to gloss over these thoughts for fear of invoking Reddit’s wrath, but in the early hours of Omega Maze Life, I couldn’t help thinking that Matrix Software had created something even though I stood up. Whatever lingering sense of subtlety remained in those animated booby games, it was clear I was watching a Z-shaped teacher spray the screen with satisfaction due to my devious numbers. But every time I forced a girl to wet herself or fuck her with a sword, the impact of those activities diminished. Not that I became insensitive to them, but rather, they quickly failed to elicit any reaction. And that’s when my thoughts shifted from the game going too far to maybe not going far enough; that it may have plateaued too soon. After making Hinata squirt like a wedge of lemon squeezed into iced tea, nothing else in Omega Maze Life pushed against the acceptable limits of abjection, ultimately turning the strange into something almost ordinary.

Whether or not fanservice is too much for gamers or just a natural evolution of the boundary-pushing booby game genre, one thing is certain about Omega Maze Life it’s not that good. Dungeon crawling, which is how you’ll spend around 75% of your time with the game, just isn’t up to par with its contemporaries and tending to the Great Garden doesn’t have the depth it does. an activity like this should have. It’s just a boring top-down experience, and no amount of girl spray on my Switch screen can change that.